In the quest to decarbonise port and terminal operations, switching to more eco-friendly equipment drivelines is becoming an increasingly pressing issue for owners and operators around the world. Kalmar’s proven, mature offering includes both hybrid and fully electric driveline options for straddle and shuttle carriers. In this article we take a look at how these are ready to power the port of the future.

Easy to store and transport, and with a high energy density, diesel has been the dominant fuel for powering industrial equipment for decades. However, it comes with the well-known downside of harmful emissions – an issue that is becoming ever-more critical for port and terminal operators in the face of stricter legislation aimed at tackling climate change.

“On average, cargo-handling equipment accounts for around one quarter of the total emissions at a container terminal,” explains Aki Heikkinen, Sales Director at Kalmar. “There is a whole host of ways to cut terminal emissions, from automation, energy regeneration and introducing hybrid or electric drivelines to fleet-level solutions like route optimisation. But eco-efficiency is not all about the equipment itself; you also have to consider systems efficiency, i.e. how well your fleet is utilised and how smart your terminal operating system is at minimising unproductive moves, and your overall resource efficiency.”

Since launching its first straddle carrier more than 50 years ago, Kalmar has established itself as a leading supplier of eco-efficient hybrid and, more recently, fully electric horizontal transport solutions. Let’s take a look at them in a little more detail.

The rise of the hybrid driveline

Kalmar first began developing its vision for a hybrid straddle and shuttle carrier back in 2008. Fast forward to today’s machines and we are looking at an eco-efficient solution that uses up to 40% less fuel and cuts CO2 emissions by as much as 50 tons per year compared to diesel-powered machines. The Li-ion batteries are combined with a compact diesel power unit with start-stop function. The smaller diesel unit is not only highly fuel-efficient, but also quieter and easier to maintain than the unit in a machine powered by diesel alone. The machines also feature a maintenance-free regenerative energy system that converts energy from deceleration and spreader lowering into electrical power, which is then stored in the battery system.

“The potential fuel savings are of course highly dependent on a number of factors including driving distances, ambient temperature, terminal operating mode and so on, but our theoretical calculations have been backed up by real-world data from the hundreds of machines that are in operation today,” says Aki. “When it comes to noise levels, externally the hybrid machines are 6 decibels quieter while internal cabin noise is 50% less than in an equivalent diesel-powered machine, so it’s a much more pleasant working environment for the operators.”

The batteries are housed in a modular power unit located on the hybrid machine’s top frame, which also contains a cooling unit for the battery packs and a hydraulic pump unit to power functions such as steering, braking and spreader movement. In general, the battery modules have a lifetime of around 10 years, and the best way to take care of them and everything else on a hybrid machine is through a Kalmar Hybrid Service.

“Since 2014 we have sold over 400 hybrid straddles and shuttles, and during 2018–2020 close to half of our sales were accounted for by our diesel-electric hybrid or fully electric FastCharge™ solutions,” Aki highlights. “It’s not only the big, global terminal operators who are going in this direction; smaller local operators are also attracted by the competitive advantages of more eco-efficient operations too, as their customers put more focus on cleaning up their overall supply chains.”

In the long term, a significant advantage of Kalmar’s hybrid offering is that – depending on the age of the machine in question – converting a straddle or shuttle carrier to fully electric operation is a relatively simple and cost-effective process compared to converting a traditional diesel-electric machine.

The Kalmar FastCharge solution is based on the same opportunity-charging technology used in electric buses, with charging taking place during the idle time in the straddle or shuttle carrier’s working cycle. Charging is supplemented by regenerative systems that store energy generated by braking and spreader-lowering operations.

“We know from experience that in a typical terminal straddle and shuttle carriers are idling a great deal, perhaps as much as 50% of their operational time, so this is the perfect time to perform the charging. The direct current (DC) fast-charging sequence is fully automated and typically takes only two to five minutes,” Aki explains. “Charging stations can be located along the natural working routes of the machines, for example at the waterside in a maintenance aisle or zone, to optimise driving distances.”

Charging takes place via a pantograph, which extends downwards to make contact with the dome located in the top frame of the machine. The driver can monitor the charging process from the in-cab screen. The containerised charging-station includes a pantograph, the location and mounting of which can be customised according to the specific needs of the terminal in question.

The first Kalmar FastCharge shuttle carrier was piloted at DP World’s London Gateway terminal in 2017 and continues to operate there, while the Moorebank Logistics Park being built by Qube close to Sydney, Australia will make extensive use of Kalmar hybrid FastCharge AutoStrads for horizontal transportation of containers. 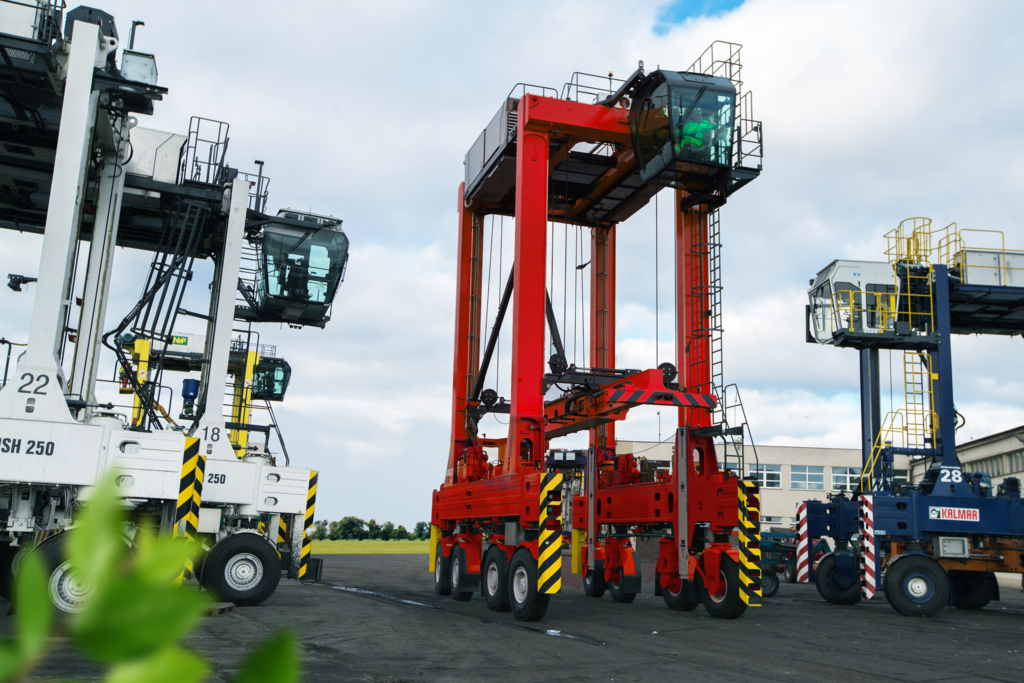