Back to the future

21 October 2015 was the day Marty McFly and Doc Brown time-travelled to the future in the movie ‘Back to the future’. The date triggered somewhat global hype among movie enthusiasts as many ‘Back to the Future II’ predictions have come true. These movies are a great example on how to let our ideas fly when thinking about the future.

Group of 28 students from Tampere University of Technology visited Cargotec headquarters in Helsinki, Finland, on 17 November 2015. In the spirit of the ‘Back to the Future-movies’, we asked the students to brainstorm on how they see the future port and here is what they envisioned.

In future ports, the level of automation is so high that no humans are needed. The loading time and energy consumption will be reduced to almost zero or at least the port is self-sufficient. In order to achieve this, the cranes and conveyors will not use traditional power supplies like diesel. Instead, ports can utilise, for example, intelligent pavements which are magnetically mono-polarised in a way that the pavement will repel the cranes so that they will hover on top of the pavement without friction or their own motor. The energy for this pavement will come from solar panels or fusion reaction, for example.

The cranes will be smaller modules that will operate by themselves without any guidance from humans. The containers will be stacked in the ship in a way that allows the cranes to lift the top container but they can also draw containers from the stack. All containers will have a microchip to identify them and their content so that the container won’t be lost.

Instead of having ports on the shores, there will be sea ports. Cargo will be moved through truck routes and then divided into smaller freights in the sea ports. The cargo will be sorted offshore to prevent ports from getting jammed and after that they will be delivered in their final destination.

All ports operations or at least the majority of them will be automated and port management can be done remotely. Empty containers will be foldable in order to save space at ports and in the container ships. Intelligent containers will have sensors installed in them to examine the temperature and other data.

It was fascinating to see how young students were able to dig in the theme within a session that lasted one hour to produce some ’out-of-the-box’ views that more senior engineers would never even dream of. This kind of energy needs to be encouraged also in our daily work as well. Enhancing similar creative thinking and idea generation is needed to expand and deepen our innovative thinking. 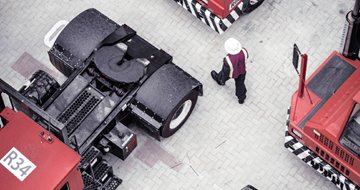