We owe our children a pristine and safe world

The goal is clear: a sustainable world with zero emissions to create a nurturing and happy world for our children. The path is also fairly clear: electricity. The details of how to get to electricity are more complex.

Today, most of Kalmar Mobile Solutions business revolves around diesel engines, and while diesel engines have their advantages, they also have one big disadvantage: They run on fossil fuels in a world trying to move away from them.

“The diesel engine’s advantage is its fuel high energy density, which means that as long as you have fuel in the tank, you have more or less sufficient energy for more than a full day operation,” says Peter Söderberg, VP, R&D Mobile Solutions Kalmar.

“But of course, there’s the environmental impact,” he adds.

The way out is spelled “electricity” as a clean energy carrier, say both Söderberg and Per-Erik Johansson, Product Manager, Electrification at Kalmar Mobile Solutions R&D.

“The world is in a vicious cycle of using more and more fossil fuels, and we need to curb CO2 and particle emissions to allow the only core energy source to rule again, the sun,” Johansson says.

“Another option could be fuel cells in which you fill the tank with hydrogen, which the fuel cells turn into electricity, leaving only water and oxygen as residue." 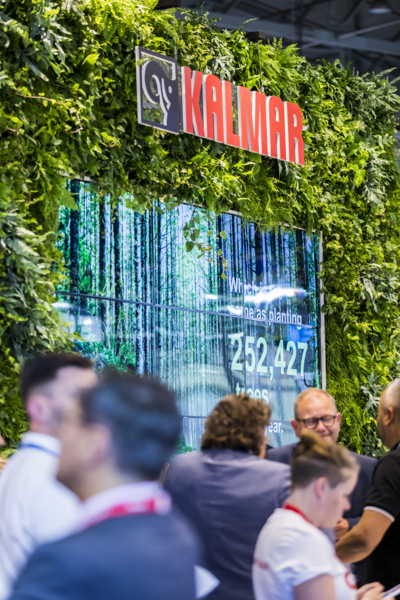 Electricity sounds like a simple enough solution, but both Söderberg and Johansson point out that it’s not just one solution. For example, a short term way to electric vehicles could be a hybrid version, an idea that is gaining traction with passenger cars, but Kalmar has chosen to opt out of developing new hybrid mobile solutions.

Electricity is the answer. But how do we do it?

Battery technology is taking great strides forwards, and can no longer be considered only heavy, large and expensive.

“Another option could be fuel cells in which you fill the tank with hydrogen, which the fuel cells turn into electricity, leaving only water and oxygen as residue,” Söderberg says.

While the original idea of fuel cells dates back to the 19th century, the modern applications are in the development phase and the infrastructure to supply hydrogen is not yet developed. However, Söderberg is optimistic.

Söderberg notes that batteries are also becoming cheaper and of better quality and that things are moving forward on that front as well.

One obstacle to switching to electric powered vehicles is a basic human condition called change aversion. Most things in nature strive for the status quo. ”Change rocks the boat, and almost always puts more demands on the organisations and individuals. Going from diesel engines to electric ones is no exception,” say Söderberg and Johansson.

“Some of our customers who use heavy equipment operate in remote locations where it may be difficult to supply enough power in the electric grid infrastructure, whereas our smallest forklifts have been electric for quite a while now,” Söderberg says.

For a customer looking to switch to electric vehicles, they most likely will have to change and upgrade their power grid, and ways of working as well.

"The switch needs to be planned carefully, considering all aspects with a sustainable environment and improved productivity as targets."

“Instead of filling up the trucks in the morning, they have to charge them during the day – and they can’t charge all of them during the same coffee break without causing a blackout,” Söderberg notes.

“The customer needs to stay focused on the big picture and be aware of the differences to having a diesel fleet. There may be a difference in operating costs, and using diesel is simple since there’s no need to plan for recharging breaks. The switch needs to be planned carefully, considering all aspects with a sustainable environment and improved productivity as targets,” adds Johansson.

The analysis takes into consideration all aspects of the operation, from how the vehicles are operated to the capacity of the electric grid.

“Everything is connected. Some customers even consider how the electricity is produced and its environmental effects, and even install solar panels and battery packs on their sites. And that is, in a word, fantastic,” Johansson says.

While things are moving forward, there’s also urgency in the air. Söderberg remains optimistic on the speed of development. He believes that local government together with financial incentives will continue to steer operations in a more environmentally friendly direction.

“In Los Angeles, for example, the Port Authority set up strict emission regulations that operators must comply with. The operators then turn to companies like Kalmar. Also, a company like Amazon that lives on distribution of products, must think about its environmental impact, and they can and are willing to pay for the solutions.

His other examples include many European cities where the local governments have banned cars in downtown areas of cities, and China where the ubiquitous scooters that once ran on gas are now electric, simply because it became economically beneficial to switch.

"The change is coming, and it can come quickly."

“People don’t realise how much is going on. The change is coming, and it can come quickly. We can see with passenger cars, how charging stations are popping up everywhere. Maybe you don’t realize it when you’re in the middle of a change,” Söderberg says.

“A change always comes at a cost, but we don’t have an alternative if we want to leave a happy and safe world where our children and their children can thrive. That’s a cost we all should share,” Johansson concludes.

Why we must invest in terminal automation today

If ports and terminals are to meet the growing list of requirements needed for greener operations, the deployment of increasingly eco-efficient solutions and implementation of different levels of automation is necessary. Christopher Saavedra, Manager, Terminal Design Services at Kalmar, shares his market insights, and why he thinks sustainable designs and automation will unlock the maritime hubs of the future.
Automation Blog Technology