In one form or another, automation is the future for terminals of all types that are looking to continuously improve the efficiency, safety and sustainability of their operations. This article examines the benefits of fleet-level optimisation for automated container terminals, taking Kalmar's Fleet Management solution as an example.

Until now, container terminal automation projects have often involved a significant amount of customization for each terminal. Automation architectures also differ between system providers, with some focusing more on equipment-level automation and others (e.g. Kalmar) on overarching fleet management systems that enable centralised optimisation of the entire fleet of automated container handling equipment.

Because automation projects have largely been unique initiatives, they have involved a lot of research and product development for each customer and use case. Equipment control software has varied with each type of machine, making it sometimes challenging to replicate best-of-breed deployments in subsequent projects.

Changing the game with standardisation

The open, modular and standardised automation system Kalmar One has been Kalmar's response to these challenges. The system enables the streamlining and automation of operations with proven functionalities and well-established processes. Kalmar One is compatible with all types of equipment irrespective of manufacturer.

Kalmar's view is that Kalmar One is merely the first step towards more open and standardised automation infrastructures. By enabling terminal operators to utilise proven features and systematic approach from one implementation to another, standardisation will reduce the deployment times and enable terminal operators to reap the benefits of previously successful solutions.

Kalmar One builds on Kalmar's long experience in automating container terminal operations. The company's earlier equipment control system Kalmar TLS has been an important component when developing Kalmar One. All equipment control functionality that was previously provided by TLS has now been incorporated into Kalmar One, with the addition of some new functionalities.

Compared with the earlier TLS system, Kalmar One includes equipment automation features, yard automation components and integration tools as one standardised system that can be used for automating container handling operations regardless of the equipment type, operation mode or automation level of the terminal. Kalmar One is an open automation system, making it possible to automate equipment from any manufacturer with Kalmar Key interfaces.

Bridging the TOS and the automated equipment

Kalmar One encompasses intelligent hardware components and sensors installed in container handling equipment and terminal infrastructure, in addition to software running on both the equipment and server levels. At the heart of the solution is Kalmar's Fleet Management product family, which handles all the main functions “under the hood” that enable centralised control, coordination and optimisation of automated equipment fleets. The product family is purely server-based software that serves as an interface between the Terminal Operating System (TOS) and the various automation solutions onboard the equipment or in the yard infrastructure.

Software-based fleet management can be implemented in different system architectures and with several different levels of automation. The Kalmar One Fleet Management solution bridges the TOS and the automated equipment. In addition to interfacing with leading Terminal Operating Systems such as Navis N4, it can be used to augment the functionality of bespoke TOS's that have been developed in-house by terminal operators. By adding Kalmar Fleet Management as a middleware layer, the terminal can get the benefits from advanced real-time optimisation without the need to revamp the existing TOS.

From the perspective of equipment control, there are general methodologies for deploying container terminal automation. The solution can be built around the OEM supplier's own equipment control system (ECS) or in some cases with the terminal's own in-house ECS. The third option is to bypass the ECS layer somewhat completely and connect each container handling machine directly with the TOS. Kalmar One represents the first option that provides terminal operators with additional capabilities for centralised fleet-level optimisation through the Fleet Management product family.

The main design principle behind the Kalmar One Fleet Management is to be able to optimise equipment utilisation, routes and container handling tasks on a global level for the entire automated operation. This type of optimisation is not feasible if the majority of the logic of equipment and container moves is handled locally onboard the equipment. Additionally, centralised fleet management enables more advanced analytics and real-time monitoring for the entire fleet. Concrete benefits include i.e. time, fuel and energy savings as well as reduced pavement wear due to automatic shuffling of driving paths and container positions. 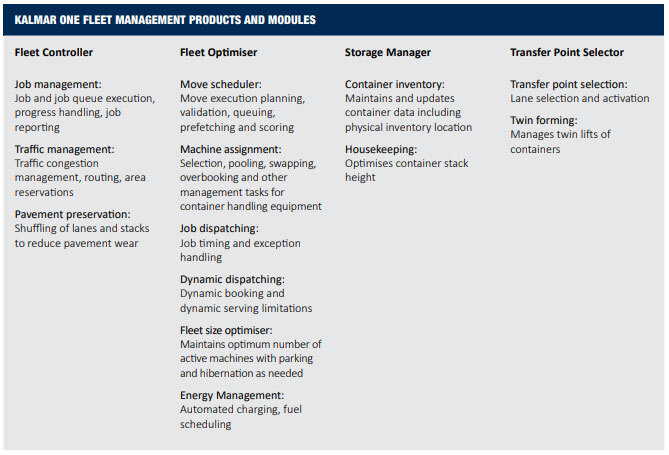 Kalmar One Fleet Management that covers the equipment control system features previously known as Kalmar TLS is currently used worldwide at over 15 container ports and intermodal terminals with widely differing automation environments. Along with other automation solutions, Fleet Management can be deployed in different ways depending on the operational needs of the terminal. A block-by-block conversion to fully automated operation can be carried out alongside manual operations. This approach helps limit operational risk and enables the terminal to gain valuable experience from automation on an incremental basis.

An alternate method is to introduce progressively additional levels of automation to the entire fleet at the same time, starting with remote crane operation and ending with full equipment and process automation. New greenfield terminals also have the option to start directly at a high automation level. With each new level of automation, the terminal will be able to gain additional benefits from Kalmar One Fleet Management and other system-wide optimisation tools.

As terminals adapt to the changing business landscape, terminal automation solutions will need to evolve to become more standardised, easier to deploy, and replicable from one installation to another. Kalmar One and the fleet-level optimisation capabilities provided by the Fleet Management product family help customers deliver consistent, measurable performance and reduce operating costs, while simultaneously improving the safety and eco-efficiency of their operations.