The Kalmar Eco Reachstacker is not only boosting customer productivity with its additional container moving capacity – it is also paving the way for electrification by preparing operators for the next generation of reachstacker technology.

When the Eco Reachstacker was launched in 2015 there was scepticism that a machine with an engine roughly two thirds the size of a conventional reachstacker engine would be sufficiently powerful.

Five years on those concerns have been thoroughly dispelled. More than 250 Eco Reachstackers are now operating across the world and 20 of these machines have already been in operation for in excess of 10,000 hours, saving customers more than one million litres of fuel and reducing their CO2 emissions by 3000 tons.

The Eco Reachstacker already uses around 40% less fuel than a 5-10 year old machine and engine supplier Volvo has now approved the use of a new driveline that will reduce CO2 emissions by 90%. This new driveline is prepared to use HVO fuel (Hydrogenated Vegetable Oil) which is a fossil free diesel product made of 100% renewable raw materials such as vegetable oils and/or animal fats but with a chemical structure almost identical to regular diesel. EU Directive ensures that oils are not coming from sources with negative environmental impact. “When you combine this with the lower fuel consumption, the CO2 emissions from the Eco Reachstacker will be approximately 94% lower than that of older machines,” explains Alf-Gunnar Karlgren, VP CCH division “This is the only diesel driven technology that can help ports meet the objective of halving their carbon emissions by 2030.”

Reduced fuel consumption is not the only financial benefit, however. The Eco Reachstacker can move between 1 and 1.5 more containers per hour than a standard machine through a combination of faster acceleration and reduced refuelling time.

For a machine with 10,000 operating hours this equates to a productivity gain of approximately €1 million based on a standard moving cost per container of €100.

The Eco Reachstacker already uses around 40% less fuel than a 5-10 year old machine and engine supplier Volvo has now approved the use of a new engine that will reduce CO2 emissions by 90%.

Karlgren has been involved in the development of the Eco Reachstacker from the beginning. He explains that the machine went through a number of iterations before it was released. “The development phase was challenging so we worked closely with customers to help them overcome any issues,” he says.

This was important since the way this machine is driven is very different to a conventional diesel-driven reachstacker. “Operators had been comfortable with big, 12 litre engines that made a lot of noise and in some cases customers were focusing on the specifications of the new machine rather than the performance,” adds Karlgren.

The first step towards electrification

Mette Kjems Baerentzen, Product Portfolio Manager, Mobile Equipment CCH agrees that there were those who struggled to see how a machine with a smaller engine could be as productive.

Driving the Eco Reachstacker in the most efficient way enables the operator to optimise the machine’s power, which is equally important for operators of electric reachstackers. The more skilled the operator the more efficient they will be at applying the appropriate amount of power for each task.

“The Eco Reachstacker can be seen as the first step towards electrification,” explains Kjems Baerentzen. “This is because it shows that ‘less is more’ and demonstrates the extent to which technology has advanced. For example, software now has a significant impact on driveline efficiency – it is no longer a purely mechanical process.”

“The Eco Reachstacker is so much quieter than the older diesel machines because the operator cannot rev the engine, which will help them with the transition to silent electric powered machines because it will extend the period between charges,” she adds. “It is about becoming more energy conscious.” 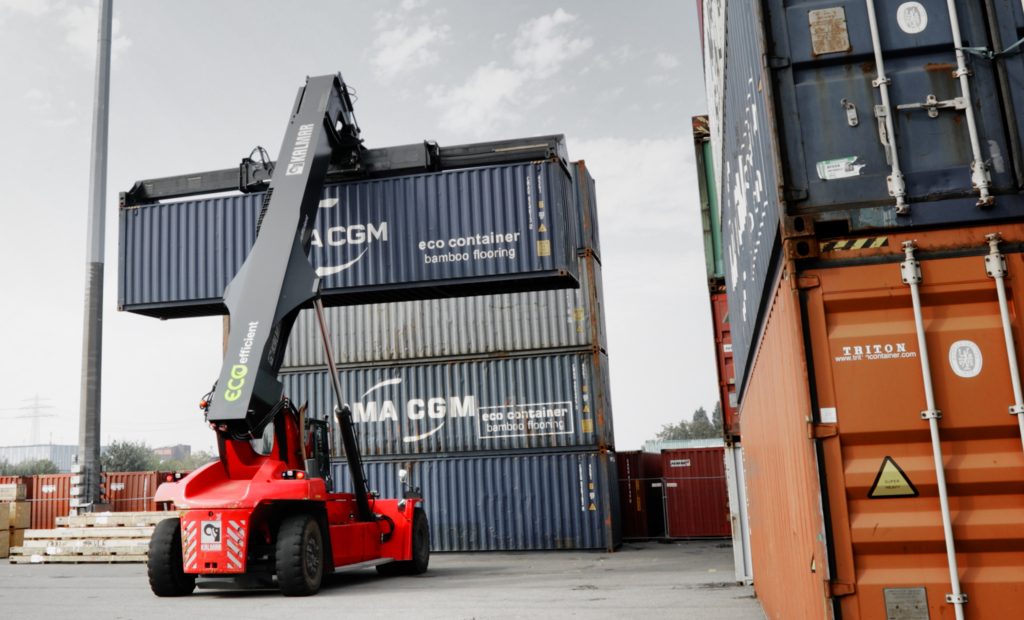 The transmission system is crucial to the operation of the machine and is the most advanced of its kind. As well as having no inefficient torque converter, the transmission allows the driver to use a drive pedal to position the machine without having to use the brake.

“This is very different from a conventional machine where the operator will be constantly accelerating and braking and therefore burning a lot of fuel,” explains Alvin Anthony, sales engineer at Dana, which developed the hydromechanical variable transmission system.

The transmission handles all the drive-related activities so there is a complete disconnect between engine speed and vehicle speed.

“This means the engine can be maintained at a fixed speed while the transmission takes care of varying the machine speed, which reduces emissions, noise, vibrations, and fuel consumption while increasing productivity by extending the period between refuelling,” adds Anthony.

One of the most significant aspects of the machine’s development is that Kalmar successfully developed dedicated controller software for this vital component. “This software enables the machine to optimise the functionality of the transmission system and has been a vital factor in maximising the energy efficiency of the machine,” says Karlgren.

“The drivers and trainers who test our equipment and train customer operators have told us that this is the best reachstacker we have built,” he concludes. “It is now not only a mature product with plenty of hours in the field – it is a machine operators like to drive.”

Barge Terminal Tilburg (BTT), part of GVT Group of Logistics, has two of the Kalmar Eco Reachstackers that have now clocked up more than 10,000 operating hours.

“Reduced fuel consumption was one of the reasons why we chose the eco reachstacker,” explains Wil Versteijnen, CEO BTT. “Another factor was the quieter operation - we are using the machines in our inland container terminals, which are located close to residential areas. Because of this environmental considerations in the form of lower emissions are also important.”

The transition to electric vehicles will be an important future decision for BTT. Currently the company has to work within restricted opening times, but Versteijnen says by using electric machines it might be possible to extend those operating hours.