When you hear the word emulation, you probably think, ‘simulation’, but these are two very different beasts. Many of us have used some sort of simulation software at some point in our lives, or at least been exposed to it at an exhibition demo or similar event.

With simulation everything you see is an imitation of real life, and whatever equipment it is you are simulating, things probably aren’t behaving as they would in the real world – in other words, scenarios are based on calculations and estimated behaviour, rather than what would happen in a real terminal. With emulation, however, we’re dealing with an exact replication of how things behave and interact in the real world. This means real software controlling scheduling and routing decisions for the automated equipment just as they would in a working terminal, combined with simulated equipment that behaves according to how it is modelled.

Simulation and emulation complement each other and are needed at different stages of the terminal life cycle. 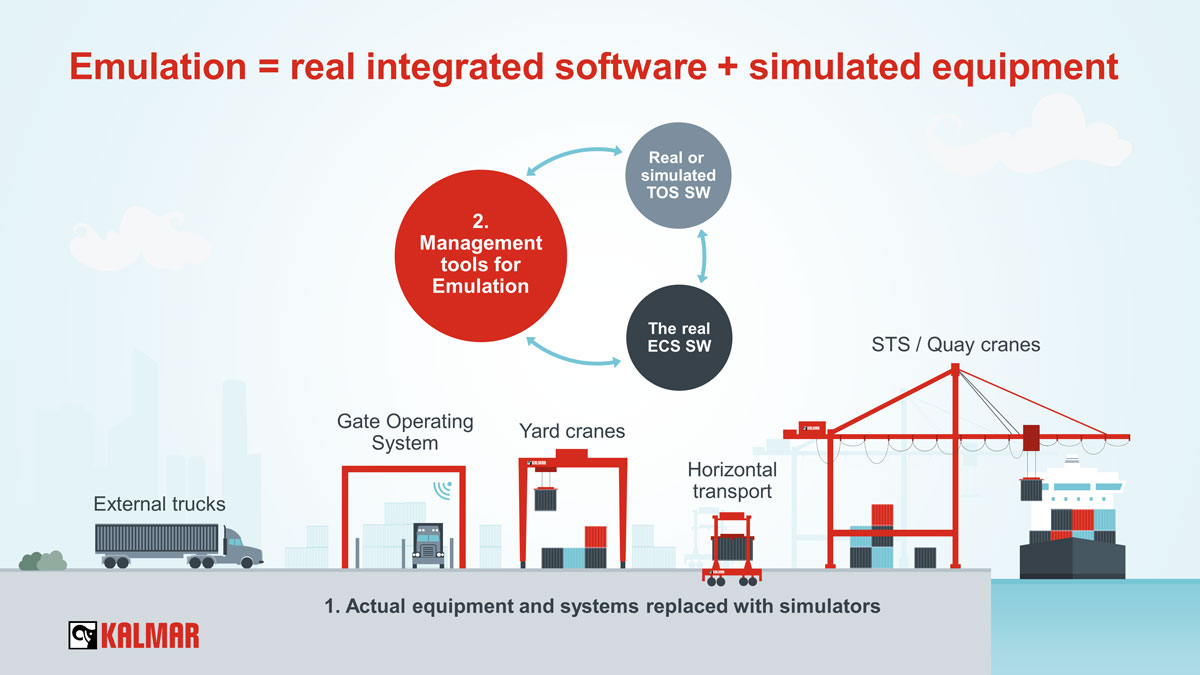 Emulation in the automated terminal world

In an automated terminal there are thousands of different parameters to take into account. In a production environment you can do some fine tuning and see what the effects are, but there are never two days the same. With emulation tools you can always start your ‘experiment’ from the same point, with the same data, which enables 100% repeatability. What’s more, fine tuning or experimenting in an emulation environment rather than with real machines and boxes is far less risky.

“When it comes to port terminals where there is automation involved, emulation is a hugely powerful tool for testing, optimising and training,” says Hannu Karp, Director, Automation Services at Kalmar. Emulation brings together real integrated software, in this case the terminal operating system (TOS) and equipment control system (ECS), with simulated equipment that mimics things like yard cranes, trucks and horizontal transport equipment,” he explains.

Emulation is used for a variety of different purposes in automated terminals. For example, it might be used to test new software elements to ensure that everything is working smoothly before they are implemented in the real environment. It also serves as a powerful tool for providing realistic training scenarios for terminal personnel because they can use real operative software in a safe virtual environment just as they would in real operations.

Finally, it is also used to support terminal optimisation, i.e. to analyze areas for improvement, identify process bottlenecks and analyse the effect of configuration, parameter or software changes on processes.

If a terminal plans to implement a standardised automation system like Kalmar One, emulation can help to ensure the right equipment investment decisions are made as it can be used to verify how the automation system will control terminal operations before deciding which equipment to purchase.

Traditionally, emulation has been no walk in the park and has required expert knowledge to create and run scenarios; this is where Kalmar’s emulation tools are helping to bring down barriers and make it an easier, faster and more accessible process.

“Our emulation management tools, based on the Kalmar One Scenario Modeller, make emulation easier and save time. Thanks to these tools, customers no longer need to be software engineers to be able to take advantage of emulation. In this way we can simplify the process and make it easier for terminals to adopt, “ Karp continues.

Kalmar's emulation tools make it easier than ever for customers to create, store and manage their scenarios thanks to the clear, intuitive user interface. While some specialist knowledge is required initially to store scenario data in the system, after that setting up and running saved scenarios can easily be done by operations personnel without extensive IT knowledge. The tools also allow for even more realistic emulation with the ability to introduce exceptions, for example an equipment breakdown or other fault, to assess their impact on terminal operations.

Learning to expect the unexpected

Emulation technologies and techniques have taken huge leaps forward in a very short space of time, but there is still plenty of room for improvement - particularly in how they are able to replicate the unexpected situations that we frequently see in a real automated terminal.

“While our tools and platforms are already capable of adding in exceptions, we want to expand this functionality so that we can add an even greater variety of ‘rainy-day scenarios’ to help automated terminals build resilience,” concludes Karp.