Exponential growth: entering the second half of the chessboard

Exponential growth ensures that the maritime business will change rapidly over the coming years. Are we involved, or just standing by as an onlooker?

What is exponential growth? A well-known example is the ancient story about an Indian king granting as a reward to the inventor of chess the amount of rice obtained by placing a single grain on the first square of the board and then doubling the amount on every subsequent square. It all starts simply enough. The 10th square still only contains less than 15 grams of rice. But the 20th holds 15 kilograms, while the 30th already has 15 tons. It is in the region beyond the 32nd square that the quantities rapidly become unimaginable.

A characteristic of exponential growth patterns is that for a long time, the growth is nearly unnoticeable. As another example, imagine dropping a 1 ml drop of water into a football stadium and then doubling the number of drops once every minute. How long do you think it will take to fill the stadium? Weeks? Months? Years?

The answer: about 44 minutes.

And the scary part is this: Somewhere around the 40th minute, the stadium will still only have a bit of water on the playing field. At this point, people will be wondering what all this fuss about exponential growth is. Just four minutes later, you will be swimming – or drowning – in the top row of the stands. The point is that the situation only becomes alarming just before the water reaches you.

The container industry is lucky, since we do not need to do anything and our industry is going to change anyway due to exponentially growing technological capabilities. The progress will help us improve the performance, quality and safety of our systems. In the near future, the world's biggest container logistics company might not even touch the actual containers anymore. Exponential growth will open new, disruptive opportunities for all of us, but will also challenge all of our assumptions of how our business works.

For the last 20 years, my own work has largely involved an everyday focus on business and technology renewal. From this perspective, the current speed of change in the container handling industry actually feels quite moderate. However, I have a strong feeling that this state of affairs will not last forever, even if we are temporarily protected by our position as a niche business without the mass-market potential that would attract the attention of the world's leading technology players.

Exponential technology growth is not a construct of science fiction. It has been with us for decades, from the processing power of integrated circuits to memory capacity and communications technology. A high-capacity hard disk in 1956 might have been 5 MB in capacity; today, our portable drives hold terabytes of data for a tiny fraction of the cost. The wireless data speed of GSM in the 1990s was 9.6 kbps, while 5G will reach 10 Gbps in the next decade. As impressive as these figures are, they don't even begin to address the potential of AI and how, in turn, it can accelerate the development of other industries.

In a previous post, I discussed the AI assistant Winston from Dan Brown's thriller Origin, and how this character is, in fact, a fairly realistic portrayal of where current AI development is heading. When AI eventually (or perhaps sooner than we think) evolves to this level, we are very close to one of the definitions of the "singularity", i.e., a point where the intelligence of our machines and the speed of technological change simply becomes incomprehensible, surpassing the brightest human minds.

As far as technology is concerned, many commentators have posited that we have already proceeded well into the "second half of the chessboard", particularly with the accelerating onset of digitalisation and how it has already affected global maritime container logistics. Have you noticed how much Google and Amazon services have improved just over the last year? Can you extrapolate from this and imagine what kind of technological capacities we will have at our disposal ten years from now? No, you can't, and neither can anyone else, precisely because of the nature of exponential change.

The exponential growth of digital technology means inevitable business change, whether we are onboard with this change or not.  Those who are will gain, while others will probably fall by the wayside.

The reason this trend is inevitable is because the world's leading technology companies have tens of thousands of people developing these exponential technologies, and the world is simultaneously full of startup companies just waiting to disrupt existing business models. Even if our industry would not face a major business disruption, exponentially developing technologies will help us improve the performance, quality and safety of our systems every day. But no matter what happens, the winners will be those that are the fastest to adapt to the ongoing change in the world.

In a world of exponential development, well-run established companies are actually the ones that are most at risk while new entrants shake up the business models. Most often, the biggest change happens in the creative crossing of existing industries. Are we doing enough  to challenge and disrupt ourselves, or choose to wait to be disrupted? 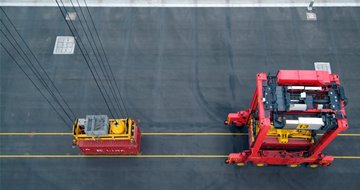