Converting to AutoRTG – the next step towards improving performance

Increasing the automation level of operations is recognised as the next step towards improving performance at today’s container terminals. Automating an existing rubber-tyred gantry crane (RTG) terminal is a large-scale project that requires deep expertise, careful planning, a capacity for wide-ranging systems integration and the ability to consider numerous factors beyond the technical implementation. Stepwise approach can help in converting the terminal to automated operation.

The path to automation in an RTG terminal

Rubber-tyred gantry cranes (RTGs) are the most popular equipment choice for container stacking at terminals around the world. RTG setup enables relatively low capital expenditures and infrastructure costs for deployment. RTGs are also highly flexible as they can be moved to a different area of the terminal if, for example, additional handling capacity is needed at another stack. RTGs also offer high stacking density and an easy automation upgrade path that is compatible with older equipment.

Automated RTGs are suitable for the same types of terminals as manually operated rubber-tyred gantry cranes. The stepwise automation of current cranes enables the terminal to gain the maximum benefit from current equipment without the need for large additional capital expenditures.

Automation enables the terminal to keep the full fleet in operation 24 hours a day without significant cost increases or the need to carefully optimise manning levels. This means that terminals can extend their operating hours and provide the best possible service to customers. During quiet times, it may require only one or two operators to keep the entire crane fleet in operation, ready to serve vessels.

RTG terminals can be set up with several levels of automation, from basic crane remote control all the way to fully automated operation. The automation level can be selected based on the existing systems, operating environment and business goals of the terminal.

“In any brownfield automation project, a key priority is to carry out the conversion with minimal disruption to the existing operations of the terminal. That is why we offer solutions that enable automation in several steps, each increasing the level of automation, or by automating one stack block at a time”, Timo Alho continues.

Manual crane systems will work even if the equipment is not in perfect condition, since human operators can often compensate for the quirks and deficiencies of each individual piece of equipment. By contrast, automated equipment always needs to be in 100% working condition to deliver its full potential.

“Automation requires a major change in practices and attitudes for maintenance operations within a terminal. With automatic operations, the emphasis shifts to more frequent preventive maintenance. However, as this maintenance is usually done at planned intervals, the impact to the operation can be minimised. As collisions and other accidents due to human error are eliminated, the need for ad hoc repairs is reduced dramatically, bringing cost savings in the long term.” Timo Alho explains.

With an automation rollout, IT and engineering need to form a joint team in which the skills and responsibilities of the people match each other and mutual responsibilities are clearly defined.

“An automated terminal requires a different employee profile. The stricter maintenance standards of automated equipment require more advanced skills in maintenance engineering. There will also be new tasks that will need to be handled by automation system specialists; system optimisation engineers; IT system service and maintenance professionals; and instructors for internal staff and external parties.”

“Today, terminals that adopt automation sooner than competitors can gain competitive advantage. Conversely, without automation, terminals will inevitably fall behind in competition against automated terminals in the same region. In the worst case, this may even mean the end of business for the terminal,” says Timo Alho.

The choice of terminal automation concept can also be significant factor in whether the terminal is able to maintain its competitiveness. Selecting a deployment based on a proven, standardised platform instead of a tailored one-off solution ensures lifetime support for the system and minimises the long-term risk of the automation conversion.

For newly built terminals, automation is already the norm, and it is highly unlikely that any major new terminals will be designed for traditional fully manual operation. For existing terminals, the benefits of automation are equally clear, and over the next few years these benefits will be reaped by forward-looking operators seeking to stay ahead in today’s intensely competitive global container shipping industry.

This article is a summary of the Kalmar white paper The Path to Automation in an RTG Terminal. 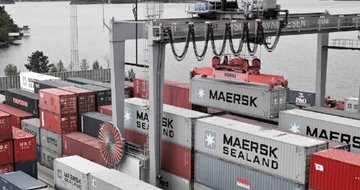