Biggest change in manufacturing since the industrial revolution?

Probably the biggest change since the industrial revolution is currently ongoing in manufacturing technologies. You may think that 3D printing has nothing to do with your business, but is that really the case?

3D printing is expected to change the production of goods. It is not only going to automate and digitalise manufacturing, but also enable us to build better products and new applications.

What is 3D printing?

While the traditional manufacturing is mostly based on processes where materials are removed, 3D printing adds thin layers of material until the desired product is created. This is also called additive manufacturing. The method is applicable to various raw materials, including metals, ceramics, rubber and plastic. So far, it has mostly been used for fast prototyping, but the number of commercial products is increasing all the time. Printing is based on computer aided design (CAD) models, which makes the manufacturing process part of digital businesses.

The benefits of 3D printing include time to market, fast ramp-up of production, agile manufacturing, ability to avoid some of the expensive phases of the traditional production process, customisation and personalisation of products, and high-end production.

However, the capability to produce something better, or something that was not possible before, should be key for renewal.

It seems that technology evolution is beating the limitations one at a time.

There are still some limitations to be compensated, such as durability and other material related characteristics of the printed components, printing time, and the price of raw materials and commercially available printing equipment. However, it seems that technology evolution is beating the limitations one at a time.

In addition to rapid prototyping, 3D printing is today used commercially in medical applications such as implants, jewellery, decorations, and mobile phone covers.

The aerospace industry is a strong believer of 3D printing, seeing it as an opportunity for less costly tooling to build more durable and lighter aircraft, which would save substantial amount of energy during the flights. 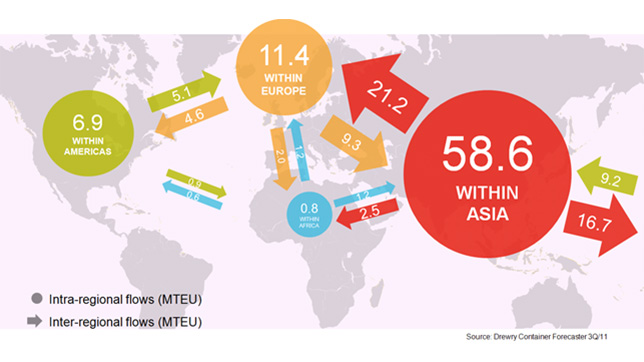 Is 3D printing going to change the world cargo flows?

The biggest change induced by 3D printing may happen in global value chains and logistics. Nobody knows what is really going to happen, but it is wise to keep the eyes open and be ready for change.

Globalisation has been a major industrial trend in which low labour costs have driven companies to set up their production sites in low cost countries, thus creating growth of cargo shipping between continents. The balance between transportation and labour cost may change. A new trend in the future may be glocalisation, where the global business is supported by local 3D production that optimises the business through speed, quality or personalisation.

Another potential change scenario is the optimisation of cost and operational efficiency of global logistics, once the local production of spare parts becomes technically and economically feasible. The local printing ecosystem may produce the critical spare parts quickly on a need basis, thus minimising warehousing needs. This would change service parts logistics and even decrease downtime due to better availability of critical spare parts. This would also create new roles in the value chain: CAD model creation for spare parts, local printing business and digital distribution network of the CAD models.

The product development speed, cost and quality may be optimised by fast prototyping, as well as design of parts that could not be manufactured before. For example, producing one part instead of assembling several parts together would optimise the production process. This would enable production of personalised solutions for cabins of the cargo handling equipment in order to optimise the fit for purpose.

What’s in it for me?

What’s in it for me? There’s a possibility for change around us. It’s up to you to start taking your role in the changing value chain before others make the decisions for you.

The third industrial revolution, The digitalization of manufacturing will transform the way goods are made – and change the politics too, The Economist, April 21st 2012
3D printing industry will reach $3.1 billion worldwide by 2016, March 27th 2012, Forbes
The implications of 3D printing for the global logistics industry, John Manners-Bell

The third industrial revolution, The digitalization of manufacturing will transform the way goods are made – and change the politics too, The Economist, April 21st 2012

The implications of 3D printing for the global logistics industry, John Manners-Bell