Automating a greenfield (newly built) terminal from scratch is often what comes to mind when discussing automated terminals. However, existing (brownfield) terminals can be automated partially or wholly to achieve the benefits of automation.

This post is based on an article first published in Port Technology International, Edition 61 (February 2014).

At brownfield terminals, the transition to automated operation is carried out step by step in different areas of the terminal to avoid loss of capacity. Automation can also be implemented by expanding the terminal to an unused area.

No matter what the approach, the project requires thorough analysis and terminal layout planning.

Numerous technology and equipment combinations are available and these need to be studied carefully in order to identify the best choice for the operator. Solutions include automated stacking cranes (ASCs) with manned or automated shuttle carriers for horizontal transport; ASCs and automated guided vehicles (AGVs); fully automated straddle carrier terminals; automated RTGs with automated shuttles; and various combinations of the above.

Terminal and process automation are recognized as the next steps towards improving productivity and performance at today’s container terminals. Automation has been steadily gaining ground over the last decades, driven by numerous industry trends.

On one hand, terminals need to utilize their existing equipment, resources and space to maximum capacity, and every incremental improvement adds up to massive savings over the course of a fiscal year. On the other hand, qualified labour can be hard to obtain, and safety issues as well as human factors often restrict the performance of terminal equipment from its full capacity. The latest supersized container ships place additional competitive pressure on terminal operators to maximize throughput and minimize turnaround times.

Many of the most dramatic examples of automated container terminals are greenfield installations built from the ground up. However, automation also holds significant potential for increasing the performance and capacity of existing terminals.

The latest innovations in terminal design are centered on decoupling the container handover and creating new hybrid terminal layouts that combine the best of multiple container handling technologies. As a result, the benefits of automation are increasingly accessible for terminals of all sizes.

Automation has proven itself for ship-to-shore container handling rates of 25 to 30 containers per hour. As to what is possible in the future, a lot depends on the individual cargo handling patterns of the specific terminal. However, for projected future performance of around 40 to 45 moves per hour, one of the key concepts is the decoupling of vessel and yard operations. This enables operators to maintain smaller fleets while reducing traffic congestion and equipment idle time.

The selection of a terminal concept (RTG, ASC, straddle carrier etc.) has massive implications for the future of any terminal. However, it is important to realize that concepts can be combined, thus providing new avenues for future growth. 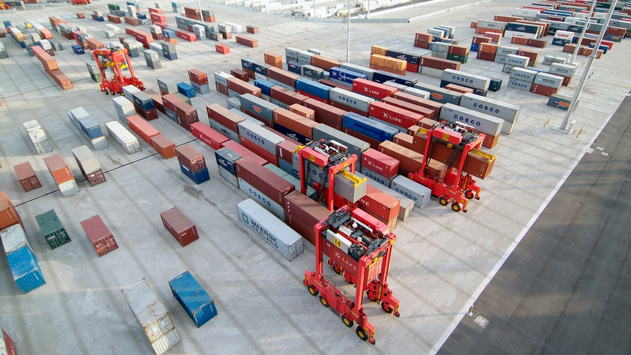 For example, a midsized container terminal could begin automating its operations with an AutoStrad stack for a relatively small initial investment. In the future, a few ASC blocks could be added for a dramatic increase in stack density. Due to the simple laws of geometry, an 8-wide ASC can stack up to 25% more containers than traditional 6- or 7-wide RTGs that need to leave a lane for terminal tractors or shuttle carriers at the side of the stack.

The benefits of automation thus include improved terminal capacity in addition to better performance and lower operational costs. For this hypothetical midsize terminal, an increase in capacity from 250,000 to 1,000,000 TEU per year would be well within reach – all without expanding the land area used.

Hybrid terminal designs also hold great promise for other applications. ASCs and shuttle carriers could be combined for more efficient handling of reefers or empty containers.

As vessel sizes increase, the demands on crane speeds will grow commensurately. As a result, remotely operated STS cranes are likely to see rapid development over the next five to ten years.

Another area of great interest is automated lashing and twistlock handling. Again, the issue is decoupling – how to ensure optimum performance by eliminating the need for one piece of port equipment to wait for another.